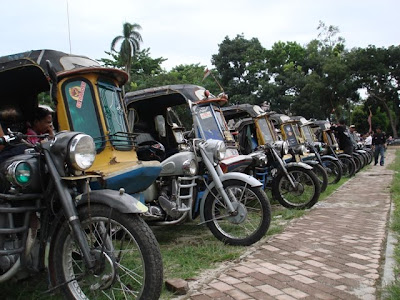 Motorcycles that are used to transport freight tricycles or pedicabs in the city Siantar is antique motorcycle Birmingham Small Arms (BSA) Made in England.
Siantar city is the second largest city after city of Medan North Sumatra Province.
The bike is now a rare antique, English as a BSA motorcycle maker has only about 800 units, 400 units Australia, Firlandia 250 units, whereas in Pematang Siantar there are still about 1000 units.
Specifications (General)
The engine: 493cc, one-cylinder, 80x98 mm, water cooling
Capacity: up to 25HP @ 4800 rpm.
Box of transfers: three, and later four-stage manual
The main transfer: a circuit
The maximum speed: 116 km / h
HISTORY
In general, BSA motorcycles to Indonesia in transition Japanese troops to the Allies (Dutch-English). BSA and then spread to areas of the Dutch colonies, including the Siantar. But not many people know if the inclusion of BSA motorcycles in large numbers to Siantar it was not brought by the Dutch army.
When the colonists ran away from Indonesia, motors BSA lost its master. There was no spare parts and qualified technicians in Indonesia. The fate of BSA Motors also ended tragically. There are 'lying' in the warehouse or are stranded on the streets. BSA motorcycle junkyard so.
Usually the PARBECAK (call for brothers rickshaw puller in Siantar) can create their own parts for BSA motorcycles. With a little creativity, in-modified Kawasaki Binter was the carburetor into the carburetor BSA. Also, do not be surprised to see the rim and an old motorcycle engine block is sleek like a motor output current year. His voice was frenzied, sometimes if passes in front of the house, TV broadcasting, too, tremble. Brum Brum .. .. thump ... thump ... thump ... Brum pletak ... (how pletak?) Yes, sometimes removing exhaust popping sound like a bamboo cannon. especially for the size of 500cc machines. Moreover, sometimes the brothers are rickshaws like fun BSA refuel it with kerosene instead of gasoline. Let the cheap! they said. Hehehe, no-nonsense.
In the 1980s, when the PSMS-prime field was victorious in the competition of the United PSSI, many supporters of Siantar flocked to the Stadium Field Example Pedicab ride this. This is incredible, considering the distance Siantar-field is 128 km. Come on, tricycles which have traveled that far? If rickshaws in Jogja to do it, could well gempor mengkayuhnya (feet can have a fit)! Hehehehe ....

Rickshaw with an increasingly rare old motor that was the uniqueness that adorn Siantar Town, about 128 kilometers south of Medan, North Sumatra.

Scarcity that makes spare parts are no longer sold in the market. Maintenance is also becoming difficult. Scarcity that just made BSA motorcycle becomes an interesting collectibles and expensive.

Pedicab Siantar originally shaped like a boat, like a machine in the field right now pedicab. Form of the passenger seat located on the left foot for two people, just made ​​of tarpaulin. On the right and left sides were given an iron buffer and can be folded, placed next to the seat cover as a barrier seepage soil or mud. In the rear seat is provided a small tub fenced metal plate, serves to place the luggage of passengers

Although many parts are not original anymore, typical of BSA motorcycles still visible. For example, a tank containing 12 liters engine with BSA logo, handlebar berkrom, speedometer BSA, alloy wheels, round headlights, and front and rear wings.

Appearance of motor tricycles BSA did look fierce. It's outside. However, passengers who ride in them feel comfortable because of spring motors are so strong but gentle. Passengers will feel like sitting in a rocking chair. Only my ears are probably a little disturbed by the sound of its engine hard and round, wailing. The sound engine is also from the pristine BSA motor rickshaw. 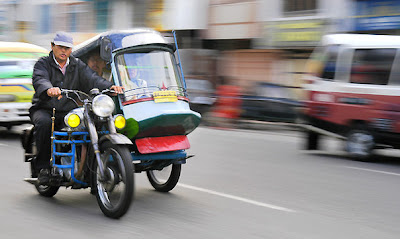 FACT
Perhaps, pedicab rickshaw Siantar is the world's fastest, most sophisticated as well .... maybe even a 500cc! Can follow the MotoGP? We Can Imagine how a BSA Valentino Rossi ride! Can skittish seven generations him! Hahahaha
So guys .....
That's means of transportation in my hometown my friends .... Siantar city.

Now, if you want to enjoy the rest of World War II vehicles while enjoying the beauty of Siantar City, before continuing the trip to Lake Toba, you can enjoy a rickshaw ride Siantar.

You have just read our article titled: Coolest rickshaws in Indonesia "Pedicab Siantar". Thank you for your visit. Hopefully this article can help you. Our hope, always come and stay faithful to this blog. Greetings. Horas... Horas... Horas... Do not forget, please like our facebook page.
Share Artikel
Facebook
Twitter
Google+