Home » Culture » Tour » Nias - The roads to the Beautiful Island

Nias - The roads to the Beautiful Island

Nias - The roads to the Beautiful Island

Nias is an island located to the west of the island of Sumatra, Indonesia. The island is inhabited by a majority of the tribe Nias (Ono Niha) who still has a megalithic culture. This area is an important attractions like surfing (surfing), traditional house, dive, jump rocks.

UNESCO in a report on the tourism potential of Nias, Nias mention that the rich cultural heritage consists of a combination of wide range of Saujana (cultural landscapes) with evidence of the existence of megalithic sites, traditional villages, stunning architecture and diversity of local crafts and customs. 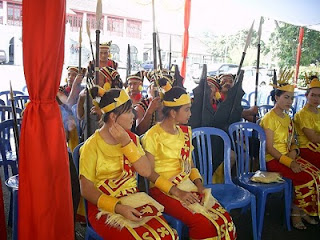 In the district of Nias, Mount Sitoli museum there that has a wealth of diverse and valuable collection. The museum was established thanks to the hard work of Pastor Johannes M. Hammerle, German citizen who has lived in Nias 36 years and became Director of the Museum to collect objects of cultural heritage of Nias. The number of collections reach 6500's. The collection consists of artifacts household tools, statues of wood and stone megaliths, jewelry, traditional weapons, currency, custom clothing, symbols of nobility to the original traditional houses called Omo Hada Nias. Facilities are the public library, meeting rooms, cafeteria, mini zoo, to the beach recreation area. Visitors can snorkel with comfortable air-from the edge of the existing pier this dimuseum. This heirloom appeal to domestic and foreign tourists, although so far only a cultural tourism activities in terms of its contribution to the outskirts of the local econom. 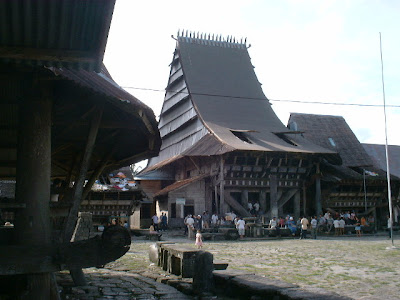 Nias tribe is a group of people who live on the island of Nias. In the original language, the Nias people called themselves "Ono Niha" (Ono = children / descendants; Niha = human) and the island of Nias as "Tano Niha" (Tano = ground).

Nias tribe is a community that lived in the environment and cultural customs are still high. Nias customary law generally called fondrakö that regulates all aspects of life from birth until death. Nias people living in ancient megalithic culture evidenced by the historical relics in the form of carvings on huge stones are still found in the interior of this island until now.

Caste
Nias tribe recognize the caste system (12 degrees Caste). Where the highest levels of caste is "Balugu". To achieve this level one must be able to do a big party by inviting thousands and thousands of animals slaughtered pigs for days.

Mythology
According to the people of Nias, one of the mythical origin of Nias tribe comes from a tree of life called "Tora Sigaru` a 'is located in a place called "Tetehöli Ana'a". According to the myth of the above said the arrival of the first humans to the island of Nias began in the era of King Sirao son who had 9 people who were sent out of the fight over the Throne Tetehöli Ana'a because Sirao. To 9 Son that is considered to be among the first to set foot on the island of Nias.

Nias language
Nias language, or Li Niha in the original language, is the language used by the inhabitants on the island of Nias. This language is one of the world's languages ​​are still not known exactly where it came from.

Nias language is one of the world's languages ​​that have survived until now by the number of active users around half a million people. This language can be categorized as a unique language because it is the only language in the world that every suffix ends in the letter he said vokal.Bahasa Nias recognize six vowels a, e, i, u, o, and coupled with ö (pronounced with a "e "as in the mention of" six "). 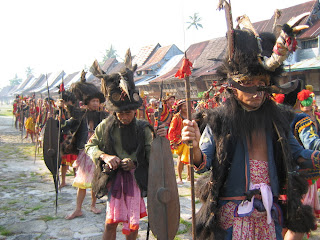 In culture there Ono Niha ideals or spiritual purpose in life with which termakna greetings "Ya'ahowu" (in free translation Indonesian "blessed hope"). Of significance is contained Ya'ahowu meaning: pay attention to the happiness of others and is expected to be blessed by the more powerful. In other words Ya'ahowu display attitudes: attention, responsibility, respect, and knowledge. If someone is doing that, it means that the person pay attention to the development and happiness of others: not only watching, responsive, and accountable to the needs of other people (who pronounced: Congratulations - Ya'ahowu), including those that are not revealed, and respect as fellow human beings as they are . So the meaning contained in the "Ya'ahowu" is nothing but the brotherhood (in peace) who really needed as a vehicle of togetherness in development for the development of living together.

Tour
To reach the tourist areas on the island of Nias, tourists can choose the path of sea and air. If the air line, flight to Nias are now quite a lot. There are several airlines serving the route Medan - Nias and Nias - Medan.

When choosing sea transport, can be done with KMP ride from Sibolga to Mount Sitoli. If the purpose of the Nisel means have to travel again through the road trip with the distance of 2 to 3 hours. 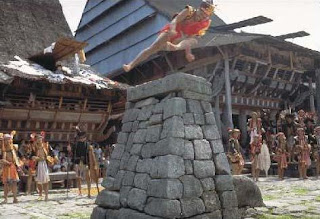 Village Bawomataluo Batudesa Hombo is located in South Nias regency, located above the hills make this village became the first place to see the sunrise.

Fahombo Stone is a cultural ritual as a symbol of the young manhood of Nias. Fahombo stone held as initiation test of physical dexterity and mental readiness of the young men in Nias before adulthood.

Stones that have to jump a stone structure that is composed megalith monument similar to a pyramid with a flat upper surface. Height less than 2 (two) meters with a width of 90 cm and a length of 60 cm. In front there is a small stone undukan cm-high 30s, which places dipijakkan feet before making the leap.

With the structure of the stone so the stone does not just jump fahombo stone. Doing fahombo stone requires special techniques because it has a certain difficulty level. In the past, even the top of the stone is covered with sharp thorns and bamboo spears. The jumper must not only traverse the rock pile, but he also must be capable of landing the right position.

state of the beach before and after the tsunami is very different, from a slightly elevated coastal structures and the 'terrible' because scattered large rocks and WAVE are higher so take caution if you want to surf here. :) 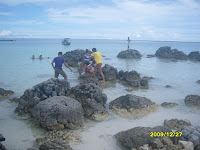 The beach is white sand, still natural, cool, cool and incredibly beautiful. located in Nias District North and not far from the capital district.

The beach is always crowded with tourists who want to find the tranquility of this beach. also crystal clear water beaches. crystal clear so we can immediately see if the fish swam some distance from the coast (near the middle of the ocean a bit, hehehe).
Nias - The roads to the Beautiful Island

You have just read our article titled: Nias - The roads to the Beautiful Island. Thank you for your visit. Hopefully this article can help you. Our hope, always come and stay faithful to this blog. Greetings. Horas... Horas... Horas... Do not forget, please like our facebook page.
Share Artikel
Facebook
Twitter
Google+